Given the size of the market, it can be difficult to pick out trends: what’s happening in California, home to nearly 800 breweries. But there are things worth highlighting. Here’s our pick of the key trends right now in American craft beer.

When Doug Odell started homebrewing in the 1970s, his options were limited. In the mighty metropolis of Los Angeles, there was only one place, miles across town, where he could buy ingredients - and even then, there was a single bag labelled ‘malt’ and another ‘hops’. Given the restrictions, it’s amazing that he or any of the other American craft-beer pioneers got hooked - but they did.

The result, more than 40 years later, is a dizzyingly complex culture that currently boasts more than 6000 breweries and, according to the Brewers Association, produced 25m US brewery barrels in 2017. The craft-beer market is now worth $26bn and, despite justified concern about market saturation, still grew by around 5 per cent last year. 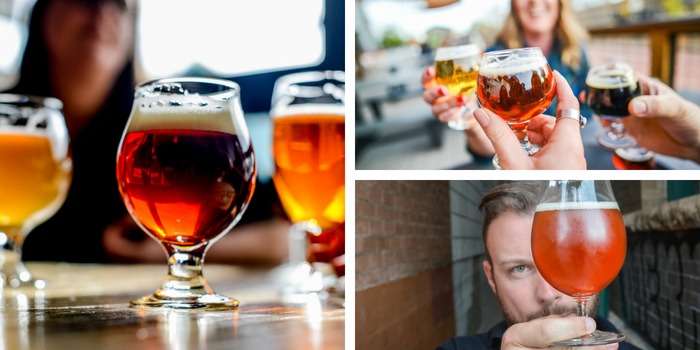 Given the size of the market, it can be difficult to pick out trends: what’s happening in California, home to nearly 800 breweries, is likely to be quite different from the scene in Mississippi, where there is a dozen. But there are some interesting things going on that are worth highlighting. Here’s our pick of the key trends right now in American craft beer:

Brewpubs are the backbone of American craft beer. More than a third of the USA’s 6266 breweries are brewpubs, where the beer is made and (largely) sold on-site. The complexity of American liquor laws  - from the three-tier system to state laws governing how breweries can sell and distribute their beer - means this is an easier path to market for some than it is for others, but it’s clearly a growing trend. According to statistics from the Brewers Association, at-brewery sales rose significantly last year. Given how crowded the marketplace is, getting your beer from brewery to customer without a middle-man is a very attractive option.

New England IPA gets all the attention, but the rise of microbrewery lager might have more of a long-term impact. From more established breweries like Founder’s - which released Sold Gold, an American-style lager made with corn - to smaller operations like the Suarez Family Brewery in New York State, there’s a growing interest in reaching out to customers who might not be as obsessed with hops as many in the craft-beer world. This passion for lager extends to German and Czech glassware and brewing techniques, too.

While bottles continue to be the most popular packaging method, cans are still on the rise. While debate still rages about the two different forms of packaging, it’s pretty clear that cans are much more portable, which is crucial. Residual prejudice against cans seems to be receding, and companies like Cask Canning Solutions, which is based in Alberta, Canada, and claims to have installed almost 900 systems in 46 countries around the world, are riding this wave.

In a nation as diverse as the United States, craft beer’s whiteness has always seemed an anomaly. Those in the business are increasingly aware of this, it seems: there’s a conscious campaign going on to open up craft-beer culture to those who have been excluded. Most notably, the Brewers’ Association has recently appointed J. Nikol Jackson-Beckham, a university professor from Virginia, to the role of diversity ambassador. “I’m really excited to have the opportunity to change how a lot folks in the industry think about diversity and inclusion,” she said when the appointment was announced in April.

It’s been a cumbersome, over-stretched term for years, but it’s now becoming clear that ‘craft beer’ is on its way out. A term that encompasses both huge breweries making beer on more than site like Sam Adams and the Sierra Nevada, and the tiny brewpub down the street, was only ever of limited use. Independent seems to be the replacement: we shall see if it takes to the same degree.