In 2010, Jeremy Warren decided to pursue a career in professional brewing and partnered with an investor who could help take him to a commercial level. Together, they moved Knee Deep Brewing Company to Lincoln, California where Jeremy began brewing out of the old Beermann’s Brewery. 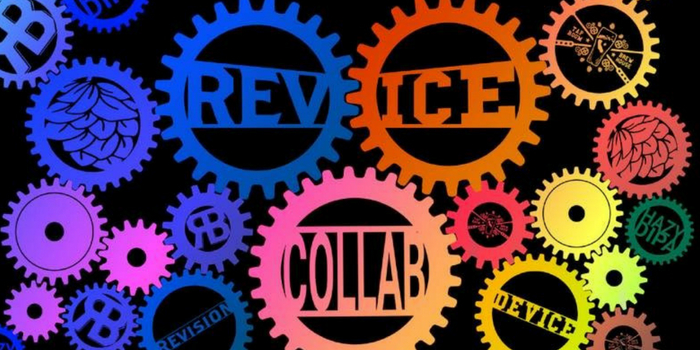 Jeremy saw Knee Deep’s growth from a startup in his garage to a national production facility, however, he wasn’t able to pursue the diverse beer portfolio that he had originally set out to brew when he first founded Knee Deep Brewing Company. In July of 2015, Jeremy decided to part ways from Knee Deep Brewing to start Revision Brewing Company, where he could carry out his original vision.  The Revision Brewery and Taproom officially opened on March 23rd, 2017.

DR. LUPULIN 3x IPA: The art and science of awesome. Somewhat of an anomaly, Doctor Lupulin is brewed with loads of hops but is not too bitter.  A high ABV brew that is easy drinking without excessive alcohol heat.

DISCO NINJA Northeast-Style IPA: The buddies at Shoe Tree Brewing kicked around ideas with them to develop this tasty, tantalizing, karate chop in your freaking mouth. Kaleidoscopic nunchuck hits to the dome with Citra, Galaxy, Mosaic and Amarillo. Stealthily slaying your taste buds, one sip at a time.

DISTANCE HAZE Northeast-Style DIPA: Thy flavour and thy aroma, they comfort me. A vision in the distance; an orange grove? A hop farm? It sure smells good. Saints and sinners all are welcome to this soul shakedown party.

PLANET LOVETRON Northeast-Style IPA: Soul with bright citrus and stonefruit notes from Amarillo, Mosaic and Citra hop, floating on a pillowy bed of malted goodness. You might love these hops, but they love you back even more.

THE BRUFF Northeast-Style DIPA: With a lot of work, a modicum of sweat and a little monkey grease, the newly refurbished machine has been repurposed to deliver hop flavour to your mouth as efficiently as possible. Featuring a heap of citrusy Citra and mounds of mango-ish Mosaic hops conveyor belted on a base of wheat and flaked oats.

Collective Gravity Triple IPA: Untethered from Earth’s gravitational pull, floating in space, pop a top and watch the cap drift. Now how to get this Triple IPA into the spacesuit. Notes of citrus and pine shoot through the universe like a comet with a touch of sweetness.

FINITE MADNESS Imperial Stout: Rich, viscous and delicious, this black gold in a glass is too easy to drink. A thick core of chocolate malt is surrounded by a gentle, crisp roasty edge. Beware, be well, be stoked.

CITRA REVENGE: Like taking a bath in the orange sunshine, Citra Revenge delivers a wallop of liquid lupulin love. In your face. From initial aroma to taste through to the finish, this Double IPA featuring 100% Citra hops tastes like sweet orange and tangerine hop goodness, with just enough bite to kill you with kindness.

MOSAIC REVENGE: Riffing on their Revenge series of single hop Double India Pale Ales, this is all about Mosaic. Orange and guava aromas harmonizing with smidges of blossoms and grassiness, making music for your mouth hole.

SIMCOE REVENGE: Like a green smoothie blended from the finest agricultural awesomeness, Simcoe hops provide a full flavour and aroma punch with notes ranging from pine to orange to herbal. The many splendours spectrum of excellence that is Simcoe has delighted IPA lovers since its inception and still does.

Drifting through the Hopyard Triple IPA: Drifting through the hop yards in the Yakima Valley during harvest is a magically odiferous experience. They try to shove and cram as much of that magnificent smell into all their hoppy beers. With love of course, because they want as much aroma to hit your olfactory receptors from a glass of their beer as from hops on the vine. Fruit-driven hops like Citra, El Dorado and Amarillo are tempered by Warrior and Simcoe in this tasty flight of fancy.

Warren is known for his world-class IPA’s, 2x IPAs and 3x IPAs and after only a year of opening the doors at Revision Brewing Company, the brewery took a gold medal win for Revision IPA in the American India Pale Ale Category  and DIPA won the silver medal in the Imperial India Pale Ale category at the 2018 World Beer Cup awards.