Bushwhacker beer is an embodiment of the fiercely independent character and the plucky, intrepid spirit of New Zealand’s early settlers. This restlessness, this courage to punch above their weight, this relentless, pioneering spirit is their driving force, and also, they believe, the very essence of being a Kiwi, hardwired in their collective soul. They brew it using the finest two-row barley and throw in just a wee bit of top-notch wheat malts, to achieve a full-bodied texture.

In the year 1949, Black Root Rot munted New Zealand hops crop. To avoid this local hop crisis, the clever blokes over at Department of Scientific and Industrial Research (DSIR) now known as HortResearch New Zealand, were told to suss out a heartier variety. Green Bullet was one of the first generations of new crossbreeds they attempted. Released in 1972, this Triploid (having three sets of chromosomes) Alpha Variety was bred by the open cross-pollination of the New Zealand “Smoothcone” hops. This research program averted the crisis to NZ hops cultivation, and the disease-resistant Green Bullet hops became a star, sought after around the globe. It is our very own New Zealand has grown Green Bullet hops mixed with German Hellertauer Magnum hops that give Bushwhacker Strong its deliciously, complex flavour. 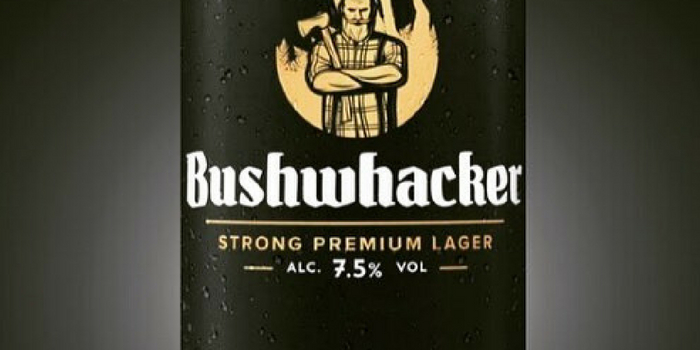 Bred from Fuggle Hops and a native parent, Green Bullet has a special zing that makes it so desirable. Considered a bittering variety typically for brewing Lager beer, it is a dual-use hop (used both for bitterness and aroma components) with high alpha acids. Yet it has a smooth taste and aroma of raisins and fruits, possibly due to its high Myrcene content. Green Bullet’s high alpha acid content is balanced out by equally high levels of floral oil, making these hops as flexible in the field as they are in the fermenter.