Beers are served in different vessels like glasses, cans, and bottles based on the type of beer and quantity of serving.

In bars and restaurants, there is often very little consistency in beer serving sizes. In some bars, you might be offered a beer in a 16-ounce pint glass, but at a high-end restaurant, you might be offered that same beer in a specialty snifter or tulip glass. And the same type of inconsistency is also found in the retail trade, where beers now come in many more varieties than just your standard 12-ounce bottle or can. With that in mind, here’s a brief guide to popular beer sizes.

Beer by the glass

For example, the 4-ounce glass is almost only used for beer flights. For any tasting, 3-4 ounces is the industry norm, and so the 4-ounce glass can be used for tasting a variety of beers. Importantly, 4 ounces is exactly one-quarter of a pint, the most common size on a bar menu. Thus, it’s easy to see why many beer flight tastings are optimally organized for sets of four people at one time.

The 8-ounce beer glass is the preferred size for high ABV beers. Most 8-ounce beer glasses will have a slight curvature to them, as in snifter glasses and tulip glasses. This curvature is not accidental – it is the shape that has been optimized to catch and concentrate all the flavors and aromas of a specific beer. The higher the alcohol content of the beer, the more likely there will be nutty, cocoa or chocolate overtones that are best captured with a beer snifter glass – much as a Scotch aficionado would also request a special snifter glass in order to fully experience the whiskey he or she was drinking.

The 16-ounce beer glass is generally acknowledged to be the universal standard for ordering the beer. If you walk into a pub in the UK or a bar in the United States, ordering a pint is pretty much par for the course. That being said, there are two different types of pint glasses. The most common are flat-sided, standard glasses. Slightly more unique are the nonic pint glasses, which have a small ridge halfway up the glass in order to help capture the beer’s aroma. Nonic glasses are far more common in the UK than in the United States.

And, putting a whole wrinkle on the standard 16-ounce pint glass is something known as the “imperial pint” glass, which holds 20 ounces of beer, and not 16. The imperial pint is far more common in Europe and the UK than in the United States.

Beer by the can 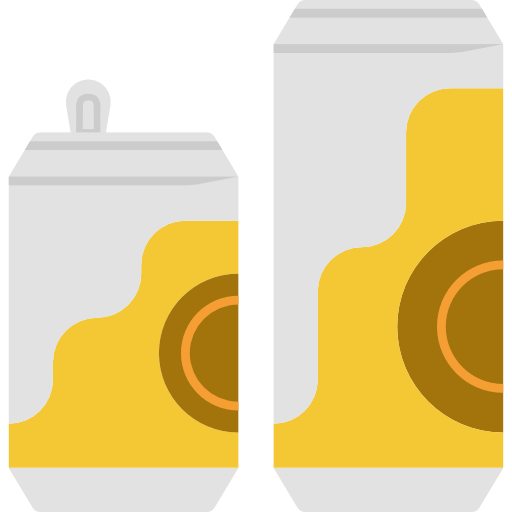 At one time, aluminum cans for beer were considered to be inferior, at least by small craft brewers trying to differentiate their specialty beers from the mass-market macro lagers. That consensus appears to be changing, however, as craft brewers have now concluded that aluminum cans can provide much superior protection against light and oxidation than bottles.

There are four popular types of beer can sizes:

Beer by the bottle

At one time, the bottle was the predominant way that beer was sold at retail locations. And, of course, if you order a beer at a bar or restaurant, you would hardly expect someone to bring out a can – instead, you would expect to have your beer served in a bottle. In terms of color, brown is the preferred color; however, some brands have embraced the green bottle color as part of their overall marketing and promotion (Heineken is one example).  There are four primary bottle sizes for beers:

Of course, these are not the only sizes for beer. If you go to a brewery or pub, you will see kegs, for example. The most popular keg size is the half-barrel, which holds 15.5 gallons of beer, or the equivalent of 124 pints of beer (which is the same as 165 12-ounce bottles).

As can be seen above, the choice of beer size might seem arbitrary at first but is actually based on the changing structure of the beer industry brought on by craft brewers. If the goal of the big macro lagers was to maximize serving size to sell as much beer as possible, the goal of the small craft brewers is to find just the right size to maximize the taste and presentation of their beers.