The Beer consumed globally in 2017 was 187 million kiloliters, here are the top 10 beer consuming countries.

According to the Kirin Beer University`s Report on Global Beer Consumption in the year 2017, China remained the largest beer-consuming country in the world for the 15th consecutive year since 2003. China topped the list, despite a decrease of 3.9% compared to 2016. Global beer consumption in 2017 was approximately 186.72 million kiloliters, down by 0.2% from the previous year, marking the third year-on-year decline in a row. Here are the top 10 countries in terms of total beer consumption. 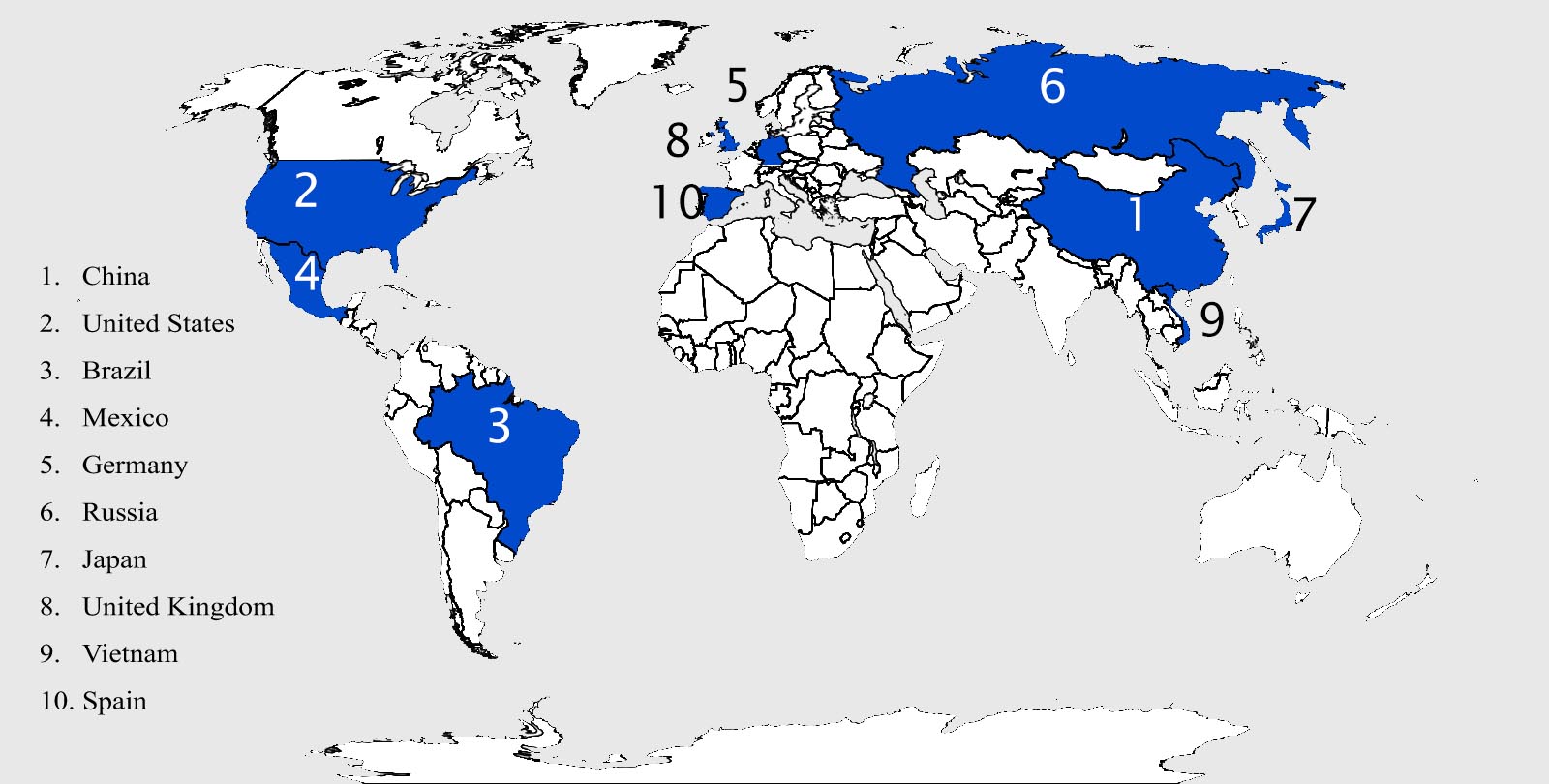 China is the world`s largest producer and consumer (Per Net Quantity) of the beer globally with net production of 40,143 thousand kiloliters. The recent rise in popularity of local Chinese beers has impacted the drinking habits of Chinese liquor drinkers. Chinese mostly prefer pale lagers, other styles that are occasionally found is Tsingtao Dark Beer. Chinese mostly use rice, sorghum and sometimes rye in addition to barley for their beer production. Bitter melon is the most commonly used bittering agent. Snow Beer is the best-selling beer in China with a net market share 21.7%. China consumes 21.5% of global beer produced with a decline of 3.9% in beer consumption.

The United States has in total of 7000+ small and big breweries which produces 23,956 thousand kiloliters of beer. The United States consumes 12.8% of global beer produced. The most common style of beer consumed is the American lager which is a form of pale lager. While the indigenous styles of amber ale, cream ale and California common are widely used, new craft beers like American Pale Ale, American IPA, Indian Pale Lager, Black IPA etc. are slowly replacing them. Bud Lights has the largest market share of 28.3% in the United States followed by Budweiser and Coors light.

Since the start of Bohemia - the first brewery of Brazil in the year 1830, Brazil has grown its beer production and consumption to be the third largest in the world. German immigration in the early nineteenth century started the traditional brewing approach in Brazil. Brazilians consumed in total 12, 565 thousand kiloliters of beer in the year 2017 with a global market share of 6.7%. Brazil had a decline of 0.7% from the past year in net beer consumption. Standard lager beers are the most popular beer of Brazil. Brazil consumes beer a lot only during the 4 days of Brazilian carnival. Brazilian beer consumption during carnival reached 400 Million Liters, which is around 4% of net year consumption.

With the total consumption of 8,218 thousand kiloliters, Germany stands 5th in a net consumption of beer globally. Germany holds 4.4% of beer consumption market which had a decline of 2.3% as compared to 2016. Germans mostly prefer wheat beers followed by Pale beer, Dark Beer and Unfiltered beer. Almost half of the German breweries are located in Bavaria. In total, Germany has 1300 breweries producing 5000 brands of beer.

Russians mostly prefer vodka as their alcoholic beverage, beer stands at the second position after vodka. Russian see beer as the less harmful alternative for vodka. Russians consume 8,008 thousand kiloliters of beer with a net market share of 4.3%. Russia saw a decline of 4.3% in beer consumption as compared to the previous year. Russians categorize their beers based on colour as compared to the traditional method of categorization i.e. based on the fermentation process.

Japanese mostly drink beer and happoshu (Low malt beer). Pilsner style lagers are the most produced beer style in Japan. The trend of a microbrewery, craft beers and homebrewing have taken over the drinking habits of Japanese beer enthusiasts. Beer accounts for 2/3rd of alcohol sales in Japan. Japanese have 1% total market of domestic beer consumption, they mostly rely on imported beers. Japanese consume in over 5,116 thousand Kiloliters of beer which is 2.7% of global market share.

Spanish drink a lot of beer, usually, their beer has 4%-5.5% ABV. Spanish people prefer lager in their beer preference. In the year 2017, Spanish drank approx. 4,050 thousand kiloliters of beer which accounted for 2.2% of global market share.